Alpacas: Camels of the Northeast Thrive in Vermont

Alpaca scarfs, alpaca mittens, and more are just a few of the items made in Vermont from alpaca.  Even if you’re prepared, your first glimpse of a Vermont alpaca is going to pleasantly unsettle you, and no explanation is going to help for at least a little while.

If you think that what you’re looking at is a cross between a sheep and a giraffe you will be forgiven. Ask us about VT Alpaca Farms or share comments. To feature your business, contact us.

In fact, few creatures are more at home in the northeast than the alpaca. Originally from the Andes, the alpaca goes into winter blanketed with as much as seven pounds of the finest fleece on earth and watches the coldest, clearest February nights pass by with relative indifference. So would you if you had a coat like that. Of course, you can get a coat like that, or what you need to make one: Terry Miller, owner of Snowshoe Farm in Peacham, Vermont will sell you some wonderful Vermont products – like an alpaca fleece or other alpaca products. But be prepared to pony up some serious dollars-fabrics made from alpaca fleece are among the most coveted in the world. A sweater will go for over $250, and a scarf for about $65.

Once thought of as animal uncomfortable at heights under 10,000 feet, the book on this member of the camel family has been re-written; alpacas are quite happy at the sub-3,000 elevations common in northern New England.

Twenty years ago, there were several million alpacas, nearly all in the mountains of Peru – and none in the United States. Today, there are over ninety alpaca farms in the northern United States, with at least thirty in Vermont; most of them are registered, including Miller’s. (There are many smaller operations with herds of a dozen or less.)

Registration is a very good idea: an alpaca with proven bloodlines showing excellent fleece quality can be worth as much as a nice Lexus. Miller began her adventure with alpacas in 1996, on a farm in Hartland. “We had a house that was surrounded by open pasture and we had to do something to keep it that way. We thought about getting a tractor or sheep and then we saw an ad for alpacas. We were intrigued and began researching the animals. 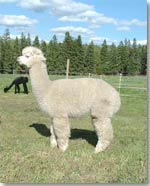 “I had not worked for a number of years and was looking for some kind of home business. The alpaca industry in this country was young and growing and it seemed very exciting. I have always had an interest in fiber arts and had just learned to spin and knit. Everything just came together for us, I had the time, we had the land and we had some money to invest. Snowshoe farm was born and we have not regretted it for a minute since.”

Alpacas make sense in Vermont for several reasons: They don’t mind the cold; they’ll eat just about anything, and they offer a viable lifestyle similar to that of the small, rural farm almost absent in twenty-first-century Vermont. Alpacas are happy with hay or pretty much anything they can find on the range in the warmer months. They demand minimal pasture, and, according to several sources, ride happily in the back of your family van, should you be so disposed.

Golden Retrievers of the camel family, alpacas are sociable and good-tempered unless they are greatly annoyed; then they become more like junkyard dogs and show their displeasure by spitting. (They lack upper teeth, and have unique lips that make this possible.)

Until recently, the Andean llama (a close relative of the alpaca) was to the Peruvian what the buffalo once was to the Plains Indian: nothing was wasted. Besides the many uses of the fleece, the meat was eaten, the hides used to fashion footwear, the tallow in candle making, and the dried excrement used as fuel.

The alpaca, with its abundance of high-quality fleece, was, perhaps, treated with more respect. (In fact, the Incas considered the alpaca to be a divine gift.) While the llamas at lower elevations were being slaughtered by Pizarro’s troops 500 years ago, the alpacas retreated to much greater heights, where the Spanish were loath to go. So, the alpaca’s tolerance to warmer weather may have been misconstrued.

Alpacas have been called “the world’s finest livestock investment.” Obviously, it is difficult to compare alpacas with other securities. Unlike the stock market, alpacas are depreciable over five years, giving the investor an immediate investment return in tax savings while his herd is growing.

Buying your own alpacas is a major investment since registered animals go from $5,000 to $30,000. Miller’s herd represents a layout of more than $200,000. Her alpacas are insured and treated much the same as other hard capital in that they depreciate over time. In addition, every expense associated with your alpaca – from the barn to the computer- can be written off come tax time.

If you’ve got some cash in a stagnant mutual fund, or quietly aging in precious metals, your best bet might be to buy a bred female and board it at your local alpaca farm -for instance, Snowshoe Farm, which will charge you two dollars a day. If you become the lucky owner of a fine “infant” -known as a cria- your options multiply. Should you do nothing but shear their coats, you can expect about $420 in fleece. So in terms of fleece alone, your animals will never pay for themselves.

The real money is made by selling bred females, offering the best males as studs (c. $ 2,000), and then harvesting the fleece. Theoretically, one can recover one’s investment in two years; in fact, not every cria has the perfect balance of appearance (conformance), fiber quality, and, shall we say in regard to the males, joie de vivre. Most of the larger alpaca retailers offer payment plans that will help get you into the game.

So, if your portfolio is top-heavy with stocks and bonds, you might want to consider an alpaca, which in a perfect world can pay for itself in two years. Besides, what other investment can you literally wear and snuggle up to simultaneously?