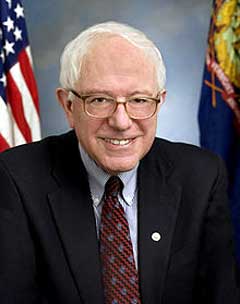 If Vermont Senator Bernie Sanders wins his bid for the US Presidency it will not be the first time a famous Vermonter lived in the White House.  The first was Chester Arthur in 1881. The second was Calvin Coolidge. Vice-President Calvin Coolidge  was elevated to President following the sudden death of Warren G. Harding in 1923.  Bernie Sanders (US Senator -VT) is hoping to be the next.  Bernie Sanders is a unique politician. He is well-liked here in Vermont by a wide range of constituents. Bernie is a champion of “working people”, conservative farmers, and liberal scholars. It’s that kind of combination of followers, he hopes, will propel him to the White House.

Bernie has a plan to end loopholes that allow corporations to take advantage of overseas tax havens. It’s a song that plays well among disenchanted voters from both parties. Bernie Sanders sees himself as a champion for social causes and unlike many of today’s politicians, is unafraid to speak his views and share his thoughts. That trait resonates well with Vermonters. Bernie is hoping the entire country will listen.

A New Yorker at birth, Bernie Sanders has found a home in Vermont. He was elected Mayor of the state’s largest city (Burlington) in 1981, and was elected to the US Congress in 1990. He ran for the US Senate in 2012 and won by a landslide. He is currently the Jr. Senator from Vermont. Bernie is astrologically a Virgo. Born September 8, 1941, in Brooklyn. His father was a Jewish immigrant from Poland. Much of his family was killed during the Holocaust.

The odds may against him, but Bernie Sanders is used to long shots, long hours and is counting on making an impact on the future of the United States.  The official Bernie Sanders for President website is https://BernieSanders.com. Please share your comments.