Vermont – like and all New England is rich in history. Vermont was inhabited by two major Native American tribes for centuries before the Europeans came along. With the exception of the Thirteen Colonies, Vermont is one of only four US States to have at one time been a sovereign state. View more photos and information about Vermont Historic Sites by following the links below.  Ask us about Vermont historic sites or share your Vermont historical information and comments. To feature your business, contact us. 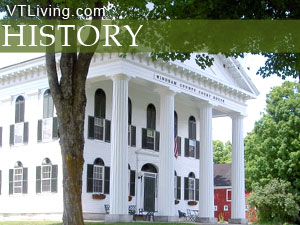 The Hubbardton Battlefield
7 miles off Route 4
East Hubbardton, VT
The location of the Battle of Hubbardton in 1777.  Museum open late-May thru mid-October, Monday-Friday.

President Calvin Coolidge State Historic Site
Route 100A
Plymouth Notch, VT
The birthplace of the 30th President of the Untied States (the only president born on the 4th of July). Homes remain as they were at the beginning of the century. Open late-May through mid-Oct. Annual July 4th celebration.

The Joseph Smith Memorial
off Route 14
South Royalton, VT
The site of the birthplace of the founder of the Mormon religion (The Church of Jesus Christ of Latter-day Saints) Scenic vistas, picnic area, free guided tours, exhibits, and information.  Open year round.

The Bennington Battle Monument
Off Route 9
Old Bennington, VT
Location of the 1777 Battle of Bennington, marked with a 306 foot stone monument. Elevator to an observation point in the monument. Open mid-April through Oct 31.

The Old Constitution House
U.S. Route 5
Windsor, VT
The Birthplace of the Vermont constitution in 1777.  Open late-May through mid-Oct, Wednesday through Sunday.

Eureka Schoolhouse
Route 11
East of Springfield, VT
One of the few surviving 18th century structures.  Exhibit of books and materials used in the 18th century. Open late-May through mid-Oct, Wednesday through Sunday.

The Hyde Log Cabin
U.S. Route 2
Grand Isle, VT
Built in 1783, one of the oldest log cabins in the United States is located here.  Open July through early Sept,  Wednesday through Sunday.

Underwater Historic Preserves
Lake Champlain
Five underwater sites for certified scuba divers.  The Horse Ferry, The Phoenix, The Cola Barge, The General Butler and the Diamond Island Stone Boat are identified by buoys and guidelines. Guidelines for diving these sites my be obtained from the Division of Historic preservation.