View moose in Vermont! Also known as Eurasian Elk, the North American Moose is the largest species in the deer family, and most often found in the northermost regions of America and throughout Alaska and Canada. Due to their sheer size, the only predators that affect the moose population are humans, bears and wolves. Moose are loners and don’t normally travel in packs or herds, and are known to become aggressive, particularly when surprised or during rutting season. The Vermont Department of Wildlife estimates there are more than 2,000 moose in Vermont. Ask us about viewing Vermont Moose, share comments or feature your Vermont business, contact us. 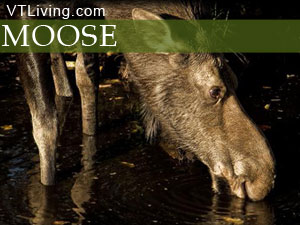 This page is dedicated to the mild-mannered moose. The moose herd in Vermont is estimated to be about 2,100 adults. Moose sightings are definitely on the rise, along with moose and motor vehicle collisions. Moose may be seen in nearly every region of Vermont.

Moose is Good Food? If you’ve spent anytime in northern Vermont or New Hampshire chances are you have seen the bumper sticker. MOOSE IS GOOD FOOD. Some people do enjoy moose meat. It supposedly tastes like sweet beef. Others prefer a complete and total ban on hunting the big animal. Moose are not a difficult prey, if you can find them. The most difficult part is probably hauling the heavy animal out of the woods. Moose often weigh more than 1,000 pounds.

Another bumper sticker concerning moose reads: BRAKE FOR MOOSE, IT COULD SAVE YOUR LIFE. Moose have been known to walk into the roadway without warning.

If you are driving and see a moose in, or near the road, STOP! Proceed very slowly and cautiously. Moose will, on occasion, turn and walk directly into the road. 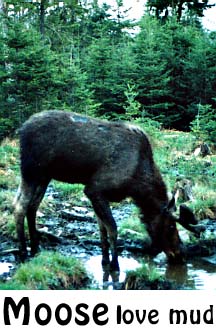 The most famous moose in America is BULLWINKLE (Rocky’s pal).

Moose are establishing resident populations in Connecticut for the first time.

Moose are most active at dusk and sunrise.

Moose are generally quite docile and eat only plants.

Moose are sometimes attracted to salt on the road.

Moose often walk in bogs and mud holes near the roadside.

Moose are very hard to see at night, (their eyes do not reflect light like those of deer) and their dark coat make them nearly invisible after sundown.

In the 1700’s the Swedish cavalry experimented with moose. The animals have better stamina and terrain mobility than horses. The Swedes were able to train and ride moose, but were unable to get them to quit running away from artillery fire. 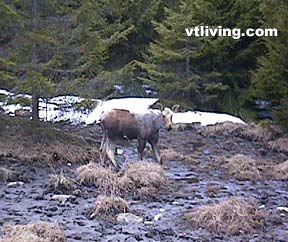 The best areas to view moose in Vermont is the rural Northeast Kingdom, especially Rt. 114 near the U.S./Canadian border near Averill, Vt. Many residents of the Averill area are afraid to drive at night for fear of hitting one of the big animals. Another location popular with moose is Rt. 105 in Ferdinand, near Island Pond, Vermont.

In north central Vermont watch for moose on Rt.100 in the Granville area.

Many moose live in the far northern areas of New Hampshire. Pittsburg, N.H. on the Canadian border is often a good location for seeing moose. “Moose alley” is what the locals call U.S. Route 3 between Pittsburg and the Canadian border. It is not uncommon is see moose, deer other wildlife on Rt. 3 between Pittsburg and Quebec. The best time to go “moose watching” is just before sundown.

Several moose and motor vehicle collisions occur each year in Vermont on Route 2 East between St. Johnsbury and Lunenburg, VT. 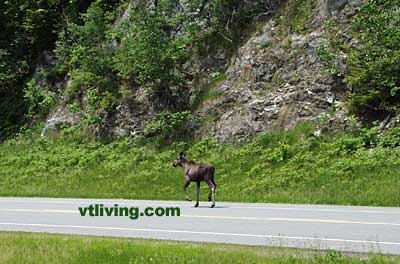 A young moose walks south on I-93, Barnet, VT