The serenity of Shelburne, Vermont’s waterfront settings and rich lakeside soil no doubt attracted railroad entrepreneur, Dr. William Steward Webb and his wife, Lila (Vanderbilt) to the Champlain Valley. In 1886, Dr. Webb purchased substantial property in that locality with the intention of creating an exemplary agricultural estate. His brother-in-law, George W. Vanderbilt, would follow his example in 1890 with the construction of “Biltmore” in Asheville, North Carolina. Ask us about Vermont’s Shelburne Farms or share comments. To feature your Vermont attraction, contact us. 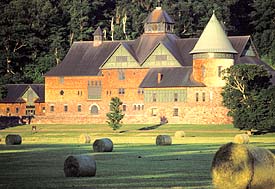 For the layout of the farm, Webb enlisted the services of renowned architects, Robert H. Robertson (who designed the buildings); and Frederick Law Olmsted Sr. (who conceptualized the layout of the farm, field, and forest). In their determination to embody all aspects of ostentatious 19th-Century aesthetics, these brilliant designers incorporated the construction of carriage trails and roads of crushed stone with the strategic planting of hundreds of thousands of trees per year to mold the grounds into a microcosm of Victorian intimacy reminiscent of the European manors described in the works of Austen and Dickens.

Construction continued over the next sixteen years and, by 1902, the good Doctor’s dream had evolved into a farm of 3,800 acres that not only exemplified cutting-edge practices in agriculture but also excelled in the field of hackney horse breeding. For the latter pursuit, Webb constructed a sizeable Breeding Barn in 1891, which was utilitarian yet cosmetically attractive. Sadly, this enterprise was destabilized by the arrival of the internal combustion engine and disinterest on the part of his target purchaser, the Vermont farmer.

The farm’s internal input and output were staggering: To support the livestock (Hackney horses, Southdown sheep, Jersey dairy cattle, pigs, etc.), 300 employees were obliged to produce 1,500 tons of hay and 12,000 bushels of grain per annum. A shrewd businessman, Dr. Webb shipped a myriad of farm-produced dairy and vegetable products to markets in New York City to subsidize his venture in Shelburne.

The family residence embodied the panache of the period and yet remained comfortable and progressive, with modern conveniences such asindoor plumbing and electricity. Throngs of guests were well accommodated in its 25 bedrooms, and well attended by a staff of resident groomsmen on the second floor! The Dr. and his wife resided in Shelburne House from May to October and during the holidays.

As with any Utopia, Shelburne Farms was doomed to undergo detrimental transitions. Farming operations began to deplete in Vermont around 1910, and continued to deteriorate through both World Wars. In the spirit of Dr. Webb’s adaptable innovation, a new dairy barn was constructed in the 1950s; however, the family progeny found it difficult to maintain the singular family farm as a viable commercial venture in view of the global transitions that were affecting agriculture.

In 1972, the Webb progeny decided that Shelburne Farms would survive (and still maintain its original objective) as a nonprofit organization dedicated to agricultural conservation and educational programs. Since that time, the property has enjoyed a new period of growth and stability while remaining a working farm. Alec Webb, current President of the Farms, states that, “over the past 30 years, it has been exciting to see Shelburne Farms evolve from a private estate into a multi-faceted environmental education center. While it has a new educational vision for inspiring stewardship and creating a sustainable future in Vermont and around the world, Shelburne Farms is continuing a long tradition of innovatve farming and land-use practices.”

Extensive restoration and modification efforts have converted the family residence into the Inn at Shelburne Farms, a 24-bedroom facility, which offers luxurious accommodations and scrumptious dining experiences in a setting which combines the dignity and grace of the Victorian era with the modernity of our own time.

Shelburne Farms offers a wide array of educational programs for students of all ages, including: Field trips for K-8th grade students, professional development for educators (elementary or middle-school level), education resources and materials, and the “Work and Learn” program (apprenticeships, internships, and stewards in training). The physical integrity of the grounds and buildings is insured by conservation easements and, as most would expect, the landscape and buildings are on the National Register of Historic Places.

In addition to ongoing programs and workshops, singular events are numerous. The Annual Harvest Festival (held each September) is a popular Vermont event, it consists of musical performances, hay rides, workshops, exhibitions of wood products, demonstrations, ethnic and traditional foods–all in celebration of the New England farm tradition.

VTLiving.com salutes Shelburne Farms and the descendants of Dr. and Mrs. Webb for their continuing dedication to the conservation of Vermont agriculture. Special thanks to the following administrators of Shelburne Farms: Mr. Alec Webb, President & Ms. Holly Brough, Publications Coordinator.