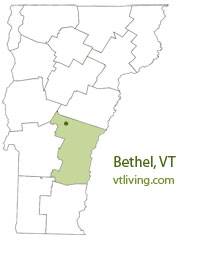 Bethel, Vermont is a town in Windsor County. Bethel includes the locations of Bethel Village, Bethel-Gilead, Lillieville, Lympus formerly Olympus), and West Bethel. Bethel is known for its famous Bethel White Granite. Bethel granite was used to Union Station in Washington, D.C. and the National Museum of Science. Bethel was the first town to be granted by the newly formed State of Vermont. Bethel is named after the biblical village called Bethel. Bethel is featured in the 2007 film “I Am Legend”.