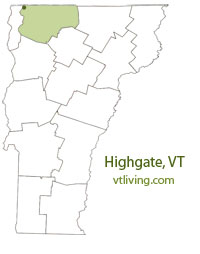 Highgate, Vermont borders Canada and Lake Champlain. Part of the Missisquoi National Wildlife Refuge is located here. Highgate is the site of the first church built in Vermont. Highgate was originally settled by Hessian troops who believed they were settling in Canada. Highgate is a border town with Philipsburg, Quebec. Tyler Place Family Resort – a Vermont resort is located on the shores of Goose Bay, Lake Champlain in Highgate. 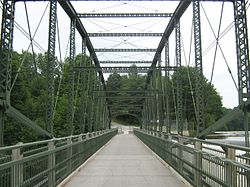 The Douglas & Jarvis Patent Parabolic Truss Iron Bridge – one of the longest bridges of its type in the northeastern United States, stands south of Highgate Falls village at the end of Mill Hill Road. The bridge was built in 1887 and was listed on the National Register of Historic Places in 1974. 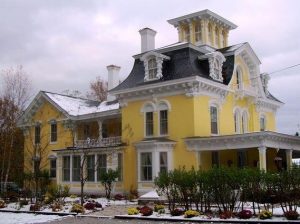 Built by Captain Steve Keyes
Highgate Manor is a manor located on Vermont Route 207 in Highgate. The building was built by Captain Steve Keyes in 1818. Highgate Manor has been used as a home, as a bed and breakfast, and as a dance hall. Local legend has it that the children of a doctor who once owned the who once owned the house and performed experiments on them have remained in the house past their death. The death of Dr. Henry Baxter occurred in 1898. The manor was one of the last stops for the Underground Railroad before entering into Canada. There are still tunnels under the manor that lead to the nearby river.