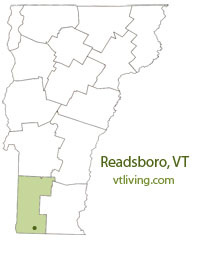 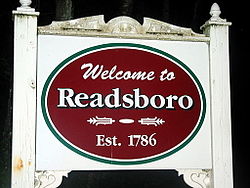 Readsboro was the Northern stop of the “Hoot, Toot, and Whistle”, a train that ran from the Hoosac Tunnel in Massachusetts. It’s located on the Massachusetts border and includes Dutch Mt. Ski Area and Howe Pond State Forest. Readsboro is in the southeast corner of Bennington County.

The town is bordered by the town of Monroe in Franklin County, Massachusetts, to the south, and by the towns of Whitingham and Wilmington in Windham County, Vermont, to the east. The Bennington County towns of Searsburg (north), Woodford (northwest), and Stamford (west) also border Readsboro. The main settlement in town, also named Readsboro, is located in the southeast part of the town, on the Deerfield River, a tributary of the Connecticut River. Nick Zammuto is from Readsboro. Zammuto formed a musical duo with cellist Paul de Jong, called The Books. The pair released several albums in musical genre of Folktronica, Experimental, Plunderphonics, sound collage and Avant-Garde compositions. According to the United States Census Bureau, the town has a total area of 36.5 square miles. Readsboro populations peaked at just over 1,200 people in 1910. Today, there are fewer than 800 residents of Readsboro.