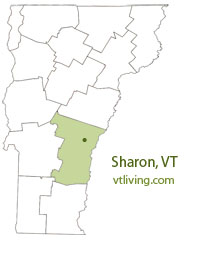 Sharon is the birthplace of Joseph Smith, the founder of The Church of Jesus Christ of Latter-Day Saints, a.k.a. The Mormons or LDS. Smith was born in Sharon, Vermont on December 23, 1805. The Sharon Academy is located here. The school began in 1996 and now educates grades 9 – 12. Sharon Vermont was part of the New Hampshire Grants and was probably named after Sharon, Connecticut – where many of the early settlers were from.