Born in 1792 as part of the Mint Act, the Quarter is one of Americas most popular coins. The quarter coin was first circulated in 1796. The original quarter coin featured Lady Liberty on the front and an eagle and the words “United States of America” on the reverse. The original design was updated over the years but remained basically the same until 1932 when George Washington’s birthday was honored by placing a silhouette of his head on the coin, replacing Lady Liberty on further mintings. Ask us about the Vermont quarter or share your Vermont visit comments. To feature your Vermont limousine rental, contact us.

US Currency The Vermont Quarter 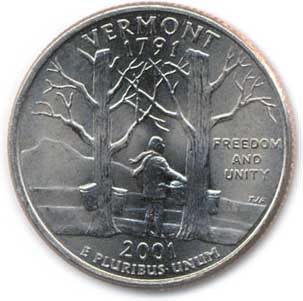 The 200th anniversary of the signing of the Declaration of Independance marked yet another change for the US quarter. The eagle on the reverse of the coin was replaced with a colonial drummer. This design modification was short-lived, the following year the design reverted to the eagle.

In 1997, the 50 State Commemorative Coin Program Act went into law and Congress commissioned the redesign of the quarter to honor the “unique Federal Republic,” and to teach children about the history, geography, and heritage of each state. Beginning in 1999, five quarters per year for ten years will be released, one for each of the fifty states in the order that they joined the union.

The birth of the Vermont quarter began in 1999 when Governor Howard Dean appointed the Vermont Arts Council as the agency responsible for soliciting designs from Vermont residents. The council received an overwhelming 1,500 designs for the new quarter.

Most concepts included the state motto “Freedom and Unity” and Camel’s hump, on of the most recognized mountains in the state, and other Vermont elements ranging from snowflakes, maple leaves, the Morgan horse, the Catamount (mountain lion), and the maple industry.

The final design was minted in 2001, the 4th quarter in the 2001 series. The new Vermont quarter features Camel’s Hump Mountain with an image of maple trees with sap buckets in the foreground. The design honors the “Green Mountain State”, the first state admitted to the Union after the original thirteen colonies.

The images that were chosen for the initial concept coin were submitted by seven year-old Molly Stockman of Brattleboro and Patrick J. Derosia, Sr., of Arlington.

Vermont is widely recognized for downhill skiing and quality maple products – two segments of Vermont life that are depicted on the new Vermont quarter.

U.S. quarters minted under the Commemorative Coin Program are a favorite of Americas coin collectors. They’re also an ideal remembrance of your visit to Vermont. Small in size but rich in history. Let the Vermont quarter remind you to visit Vermont, try our maple products, ski our mountains, and experience northern New England hospitality.