Eureka Schoolhouse began functioning as a one room schoolhouse in 1790. Upon the completion of Crown Point Military Road, which connected Fort No. 4 in Charlestown, NH with the Fort at Crown Point on Lake Chaplain, Springfield, VT became a big settlement, and was known as the “southern gateway.”  After the first villagers settled in Springfield they began construction on the schoolhouse in 1785 and completed it in 1790.

David Searle was the first school teacher, and also came up with the name Eureka. David graduated from Yale University and sought out a teaching career in Fort No. 4. When he arrived at the fort the people suggested that he head down to Springfield to start teaching in the new school. When David first saw the school he cried, “Eureka!”  which in Greek means, “I found it.”  The name stuck. Ask us about VT Museums or share comments. To feature your business, contact us. 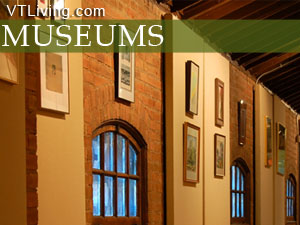 In 1835 the Eureka schoolhouse was moved across the street, and had extensive alterations made on it. The school continued to be in use until 1900. It remained empty until the mid 1950s, when a group of citizens recognized it’s historic significance. They had the building moved to a more populated area, so that more people might have the opportunity to visit it.

Many period antiques have been donated to keep with the original eighteenth century feel. They are open late May through mid October, call to check on hours. 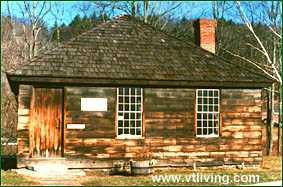 Getting There By Automobile

The Eureka Schoolhouse is located in Springfield on State Route 11, east of the village of Springfield and west of U.S. Route 5 and Exit 7 of I-91.