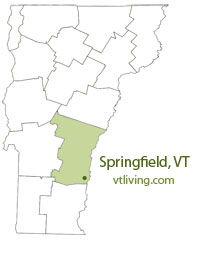 Welcome to historic Springfield, Vermont. Known locally as the “Cradle of Inventions” and “Precision Valley”, Springfield, Vermont has produced many notable inventions, including the Breech Loading Gun, the Steam Shovel, the Sheep Shearing Machine, the Corn Planter, and the Common Spring Clothespin.

The town of Springfield, Vermont was settled in 1752 along the Black and Connecticut Rivers. Located 30 miles north of Brattleboro in Windsor County, the town is easily accessible from Interstate 91.

Springfield, Vermont attractions such as shops, galleries, inns, and restaurants can be found throughout the town and along Routes 10 and 12. Local points of interest include The Eureka Schoolhouse – a one-room schoolhouse built in 1785 and housing a collection of 19th-century educational materials; The Springfield Art & Historical Society, located at the Miller Art Center on Elm Street, just up the hill from the business district; And, the Hartness House Observatory and Basement Workshop Museum, where James Hartness and Russell Porter produced the conceptual drawings for the Hale 200″ reflector on Mount Palomar in California.

In the mid-1800’s Springfield inventor Joel A.H. Ellis made doll carriages and jointed dolls from maple wood. The dolls are now collectibles – they originally were sold to dealers for $9, $10.50, and $13.50 per dozen for sizes small, medium, and large.

Tory’s Cave is located in Springfield, Vermont, across the Connecticut River from Charlestown, New Hampshire. The cave has two entrances, one of which has a commanding view of the river. The cave contains a room large enough to hold several people. A Tory, Shem Kemfield, from Charlestown, purportedly lived in the cave for a short time. 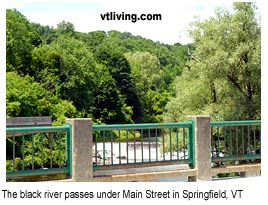