A Minor League Baseball Team based out of Jamestown, New York moved to Vermont in 1994. This team, due to its affiliation with the Montreal Expos, became known as the Vermont Expos. Vermont’s minor league team has been based out of Burlington since their arrival in 1994. But when their parent team changed their name to the Montreal Nationals, the minor league team decided it was time for a change as well. A contest was held in 2005 to find a new name. Over 30,000 entries poured in and among them was the title The Lake Monsters in reference to the infamous Lake Champlain monster, Champ. The team picked up the name for the 2006 season and welcomed their new mascot. Ask us about VT activities or share comments. 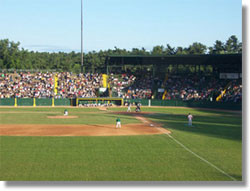 The Vermont Lake Monsters have become a wonderful part of the community. They sponsor many charity events, both alone and in collaboration with other participants. They organize a youth group program that allows businesses to gain exposure through buying game tickets for school and group outings. One of the most popular annual events is the “Hot Stove” banquet and auction. The event sponsors a different charity every year. Some of these have included; Linking Learning to Life- a organization that works to better education and job opportunities for children and teens, and Jim’s House- an organization that supports victims of Lou Gehrig’s and other neurological diseases. The team and Champ are also available by 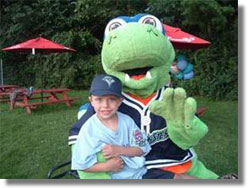 Vermont’s Lake Monsters offer a great opportunity for a family outing all summer long. The team’s season runs from mid June through early September. Centennial Field is the oldest professional field in the USA and has housed the Vermont Minor League team since its move. A day at a game here always provides fun and excitement. With many of the team’s players working to join the Major Leagues, fans can always count on competitive and exciting games. Off the field, Champ provides sideline and between innings entertainment. With his usual antics, such as four-wheeler riding, roller skating, human bowling, using a super soaker to drench fans and shooting t-shirts into the crowd with a specialized shooter, Champ is bound to try and steal the show.

With tickets that cost under $10 for both reserved and general seating The Minor League games offer affordable fun to the community. With Group rates, party rates, and mini packages there are many ways to enjoy the season. What better way to spend a day than bringing the family to experience one of America’s favorite games while enjoying the great outdoors in scenic Vermont.