Find scenic Vermont Covered Bridges in the southern section of Vermont. Southern Vermont includes the famous Mt. Snow region, the Deerfield Valley, historic Manchester, Arlington, Bennington, and Shoreham.  A short venture off of scenic Route 100 will bring you to several historic covered bridges. Slow down, take your time on the dirt and gravel roads in this area and discover some of the state’s most interesting covered bridges. To feature your business, contact us. 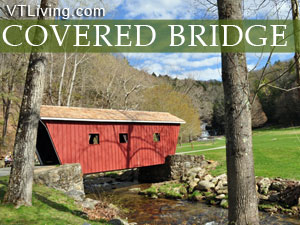 Route 7A
Bennington, VT
Built in the 1840’s using town lattice style trusses the Silk bridge crosses the Walloomasac river on Rte 7A.

Paper Mill Village Bridge
Off Route 7A
Bennington, VT
Built in 1889 by Charles F. Sears, this bridge was constructed using the Town Lattice style trusses and in easily visible from Rte 7A.

Henry Bridge
Bennington, VT
Completely rebuilt in 1989, this bridge was the location where Ethan Allen and the Green Mountain Boys confronted and sent home a NY sheriff who had come to remove the existing landowners.  This was one of Vermont’s moments of independence.

Shoreham Covered Railroad Bridge
East Shoreham Road
Shoreham, VT
Built in 1897, this Howe Truss Bridge is one of the few surviving railroad bridges in the state.

Green River Bridge
Jacksonville Stage Road
Guilford, VT
Built in 1870 Town Lattice is unique in that local residents keep their mailboxes inside it. 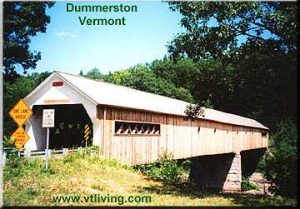 Scott Bridge
1.5 Miles South of Routes 35 & 30 intersection
Townshend, VT
Now a state-owned historic site, this 1870’s has differing types of construction throughout it.

Hall Bridge
Off Routes 25 & 121
Rockingham, VT
Built in 1870, this town lattice was completely rebuilt after an overloaded truck shattered parts of it.

Victorian Village Bridge
Route 103
Rockingham, VT
Built in 1872, dismantled in 1959 and rebuilt at the present location in 1968 as an ornament to the VT Country Store on Rte 103.

Bartonsville Bridge
Route 103
Rockingham, VT
Built about 1870, this 159 ft Town Lattice design spans the Williams River and was rebuilt in 1983.

Baltimore Bridge
Springfield, VT
Built in 1870  and moved near the state’s oldest one-room schoolhouse in 1970. This is a 37 ft  Town lattice bridge.

Titcomb Bridge
Off Route 106
Weathersfield, VT
Built in 1880 this 48 ft Multiple Kingpost design was moved to preserve it from a control dam flood.

Salmond Bridges
Henry Guild Road (off Route 131)
Weathersfield, VT
Built in 1875, this 53 ft multiple kingposts was moved to save it from controlling dam flooding.