The History of Saint Bernards


A truly accommodating country hotel with 96 spacious rooms and suites, enhanced guest services, and a new look. An exceptional lodging value with all the comforts of a first class hotel. Indoor pool, hot tub, restaurant, lounge, game room and views of Okemo Mountain.
Visit The Pointe at Castle Hill Resort

The Norwich Inn, 325 Main Street, Norwich, VT 05055
The Norwich Inn is a historic Vermont inn located just across the river from Hanover, New Hampshire. Our new Ivy Lodge has 2 king bedded rooms with cozy fireplaces and spacious bathrooms that are "pet friendly". With special flooring and a comforting dog motif throughout, these rooms are sure to make your companions feel right at home!
Visit Norwich Inn Norwich

The Vermont Inn, 69 Rt. 4, Mendon, VT 05701 | 800-541-7795
This 1840 farmhouse on six acres surrounded by the Green Mountains was featured in Recommended Country Inns of New England and VERMONT Magazine, and offers fine dining with an extensive wine list. Golf and ski packages are available.
Visit The Vermont Inn - Mendon, VT 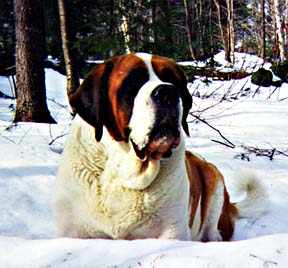 The origin of the Saint Bernard Dog is tied to the mountain pass and the monastery of the same name. The Great Saint Bernard Pass, provides a route between Switzerland and Italy.

In 57 B.C., during the Gallic wars, Caesar attempted to conquer the alpine tribes and assure safe passage over the Alps. However, it was not until 7 to 6 B.C. that the Roman legions, under Augustus, conquered the alpine region and secured the pass. The “Tropaeum Alpinum” in La Turbie, stands as a monument to past victories by Roman legions and lists the Alpine tribes, whom they defeated.

The small path over the Summus Poeninus, as the Saint Bernard was then called, was enlarged by Emperor Claudius in the year 43. The improved route could accommodate carriages and was given the rank of an imperial road. Roman garrisons from Aosta and Martigny were responsible for the safety of travelers. A small temple in honor of Jupiter (Jovis) was built on top of the pass at an altitude of 2464 m. and a small “mansio” was added to accommodate travelers. The pass was the most important crossing over the Alps and provided the shortest path to the newly conquered province of Britannia. In honor of Jupiter, the mountain was renamed “Mons Jovis.”

After the Teutonic incursion (starting around the year 500), the pass lost its importance and was used less and less during the following centuries. Roads leading toward the pass became desolate. The pass regained its importance during medieval times but was plagued by brigands and robbers who preyed on travelers. 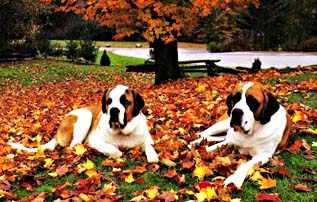 Legend states that the Monastery was founded around the year 950, by the Holy Saint Bernard of Menthon (canonized in 1124 and deacon in Aosta). However, historical fact confirms a meeting between Bernard and the emperor Henry IV in the year 1081, while both men were in Pavia. According to Donnet, St. Bernard contracted a ‘fever’ shortly after the meeting and died in Navarra on May 29, 1081. Thus, it is unlikely that Bernard founded the Monastery 130 years before the date of his death. It is believed that the Monastery was actually founded in or around the year 1050. The evil spirits that Bernard supposedly defeated, were most probably the bands of robbers who frequented the pass.

Once founded, the Monastery required a reliable income in order to fulfill its duties. A complete list of all donations to the monastery commenced in 1125. In 1177, a Papal Bull from Pope Alexander III placed the Monastery under papal shelter. At that time, the Monastery’s assets enumerated around 80 estates from Sicily, France, Switzerland, and England.

The pass over Mont-Joux, as the pass was then called, regained its prior importance for commercial travelers and pilgrims to Rome. During the next four hundred years, the Monastery grew to about its current size. It was in the sixteenth century that the pass and the Monastery were given the name of the Saint Bernard.

The history of the Saint Bernard Dog is predicated on access to the Monastery. The pass was deserted for centuries, thus preventing the routine shipment of animals to regions surrounding the pass. From the Roman age to the time during which the Monastery was founded, there was not a steady influx of dogs. The interruption of the shipment of dogs to the area is important to understanding the origin of the Saint Bernard.