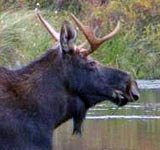 If you are seeking a rural Vermont adventure, a chance to witness moose, bear, and migrating birds, or just want to enjoy a walk in the wilderness, consider a visit to The Nulhegan Basin, located in the Northeast Kingdom of Vermont.

Nulhegan (pronounced Nul-HEE-gan) is a Native American word meaning a type of deadfall trap used to capture small game. The Nulhegan Basin is part of the US Fish and Wildlife Service and is dedicated to preserving the Connecticut River – the longest river in New England.

The Nulhegan Basin was established in 1999 when The Conservation Fund purchased 26,000 acres of land from Champion International Corporation. Ask us about Vermont’s Nulhegan Basin or share your Vermont attraction reviews and comments. To feature your business, contact us.

The Basin was formed just below the earth’s surface when a pool of magma solidified more than 300 million years ago. New England was once home to active volcanos, the tops of which became basins after millions of years of erosion. The once bubbling lava is now one of the coldest lowland areas in the Northeast. Snowfall averages 100 inches a year.

This is a remote and wild area. Nulhegan is a popular Vermont birding destination. Boreal bird species include; the black-backed woodpecker, black and white warbler, back-throated blue warbler, green warbler, Blackburn Ian warbler, boreal chickadee. Many migratory songbirds can also be seen and heard in the forests. Mammals include; moose, black bear, white-tailed deer, snowshoe hare, red squirrel, beaver, fisher cat, bobcat, and coyote. The largest wintering deer yard in Vermont is said to be within the confines of Nulhegan Basin. 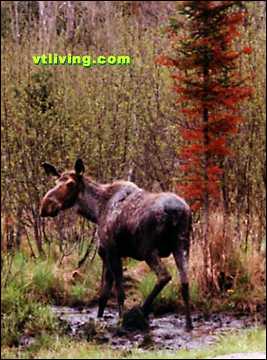 Nulhegan Basin is a mixture of woodlands and wetlands, peatlands, bogs, and beaver-dammed forested wetlands. Rare plants include orchids and other wildflowers like the pink, white and yellow lady slippers, Canada lily, trout lily, and countless others.

Nulhegan Basin features an extensive road system. Visitors can walk the miles of hiking paths and former logging roads to reach remote locations for observing or photographing wildlife. The prime times for wildlife viewing are early morning and evening. A popular viewing location for moose is just west of the Nulhegan headquarters building, along Vermont Route 105.

The Nulhegan Division is part of the premier region in the state for both hunting and fishing. Deer, ruffed grouse, snowshoe hare, moose, black bear, and woodcock and the most sought-after targets. Lewis Pond and the North and Black branches of the Nulhegan River offer fishing for trout, horned pout, and other species. Trapping is allowed by Special Use Permit.

Trail access to Nulhegan varies by season and road conditions can change rapidly. Nearly 40 miles of gravel roads are open to driving or hiking during the summer and fall months. During winter, access is by snowmobile, cross-country skies, or snowshoes. The snowmobile trails are managed by VAST (Vermont Association of Snow Travelers) according to statewide and division-specific regulations.

Nulhegan roads are closed to all vehicles during “Mud Season“, which occurs just after snowmobile season has ended. Hiking trails are available. Call toll-free 1-877-811-5222 for more information about current road access and conditions.